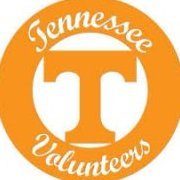 Tennessee football: Black jerseys to be worn vs. Georgia

By UltimateVolfan, November 12 in Talk about the Tennessee Vols